The family business catching sustainable cod for the Rio 2016 Olympic and Paralympic Games.

As long as people have lived in Iceland, they’ve harvested the bounty of the sea.

Iceland’s first inhabitants brought with them a seafaring way of life which, along with the island's pristine environment and rich fishing grounds, has allowed them to prosper. Today fishing remains one of Iceland’s main sources of income - and pride.

By the end of World War II, Iceland was one of the wealthiest and most developed nations in the world. But, in an increasingly global market, holding onto this hard-won prosperity has required the country to adopt a new, more considered approach to the way it manages its fishing resources.

"Many good men gave their lives for what we have today."

Pétur Hafsteinn Pálsson is general manager of Visir, a family-owned fishing and processing company based in Grindavik, south west Iceland.

For a man responsible for one of Iceland’s most successful longline fleets, Pétur is surprisingly humble.

“My name should have been Sighvatur, after my grandfather”, says Pétur. “But my father had a very good friend, a skipper, who died aged 24 saving his crew. So I have his name – Pétur Hafsteinn.

“My father never talked much about it or his feelings...
Perhaps because he also lost his father and uncle at sea when he was just twelve. But when I was at navigation school, I met Pétur Hafsteinn's son, Kristján. We ended up at the same school, just like our fathers.”

Pétur hears from Kristján from time to time. He used to receive birthday cards from his grandmother. But it’s the story of Pétur’s grandfather, Pall Jónsson which has had the biggest influence on his life. 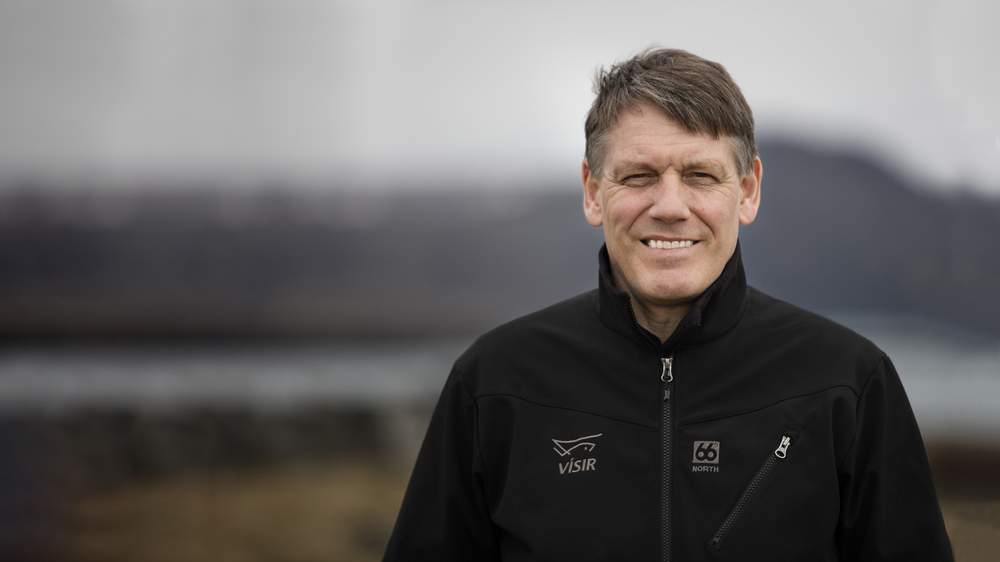 In 1930, Pétur’s grandfather, bought a fishing boat named Fjölnir – a large longline vessel for catching cod and ling. During the Second World War, boats like this provided a lifeline to the allied forces, bringing fish to Britain. It was profitable, but dangerous work. By 1943 Pall had saved enough money to build a second boat, the Hilmir. 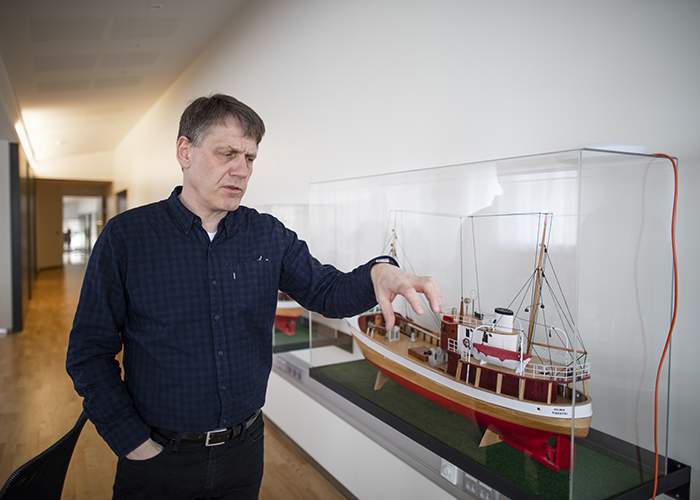 Then tragedy struck. On 25 November 1943, during its maiden voyage, Hilmir disappeared along with everyone on board, including Pétur’s grandfather. “No one knows exactly what happened,” says Pétur, “but it was probably because the bridge was reinforced with concrete to protect the crew from shooting, making it off balance.”

Just 18 months later, the Fjölnir was hit by a cargo vessel as it sailed close to Ireland. Its lights were off so as not to attract u-boats. Those on board, including Pétur’s great uncle were the last five Icelandic people to lose their lives in the War.

Today, models of the two boats are displayed in Visir's board room - a reminder of the family's past.

Pétur's son in law, Johann Helgason, manager of Visir's fresh and frozen processing site, holds a cod - just one from the day's catch.

In 1956, Pétur’s father Páll Pálsson bought his first fishing boat at the age of 25 with the intention of building a legacy to his father. The boat sank in a fishing accident in 1964. The crew survived and with the insurance money, Páll and his wife brought Visir, the company which Pétur and his family still own today.

But Pétur’s family has been doing a lot more than fishing.

Visir celebrated its fiftieth birthday in 2015. As part of one of the world’s most well managed fisheries, it has transformed itself into a thoroughly modern business, informed by data and technology.

Visir’s new factory turns out 500 portions of fresh fish per minute – the equivalent to between 15,000 to 20,000 individual fish per day. Scanning machines and water jet cutting ensure no bones are left in the fine white fillets. The efficient staff carefully trim and pack the portions. They break every two hours for 30 minutes, enjoying fresh offcuts from the day’s catch for lunch.

Visir's product of fresh, frozen and salted cod and ling supplies customers throughout Europe and North America. Looking at the sheer volume of the catch, you’d be forgiven for thinking the supply from Iceland’s waters was endless. But it hasn’t always been this way. 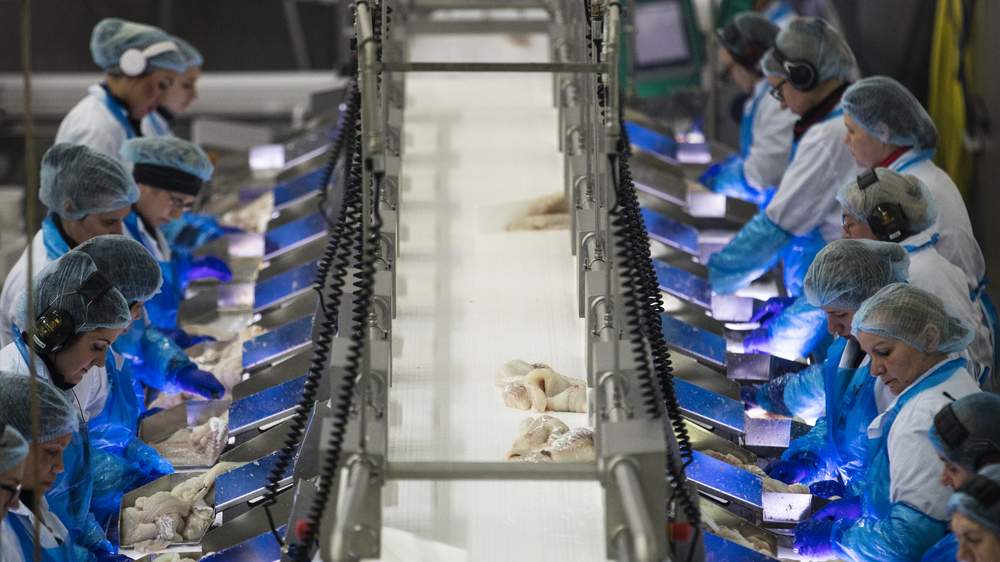 The collapse of the herring stocks in the 1960s lead to high unemployment.

The Icelandic government, looking to diversify the economy and reduce dependence on fishing, invested heavily in other resources such as aluminium. It also introduced Iceland’s Fisheries Management Act, and in 1983 set quotas for the catch of fish in its waters.

These quotas, informed by scientific research, set the amount of fish (by weight) that each company can catch. Quotas can be traded and sold between companies, but the total amount caught per year cannot exceed the government target.

The quota system was controversial at first, but has ultimately led to more profitable, efficient and environmentally sound fishing. 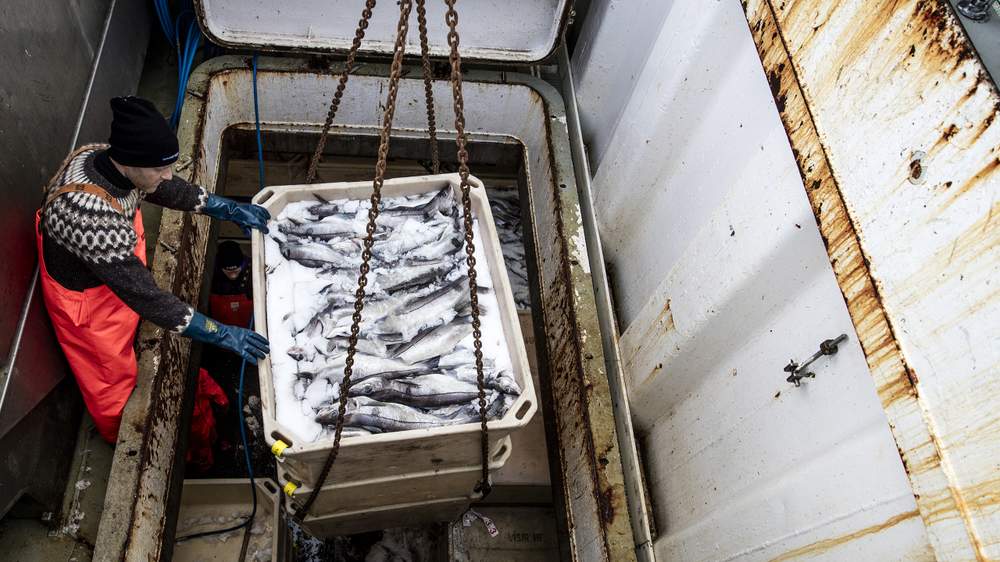 Quotas are set based on advice from the Marine Research Institute. Their researchers visit Visir regularly to collect samples. As well as measuring and weighing the fish, they sample otoliths (a small bone from inside a fish's head which grows throughout its life) to work out their age. 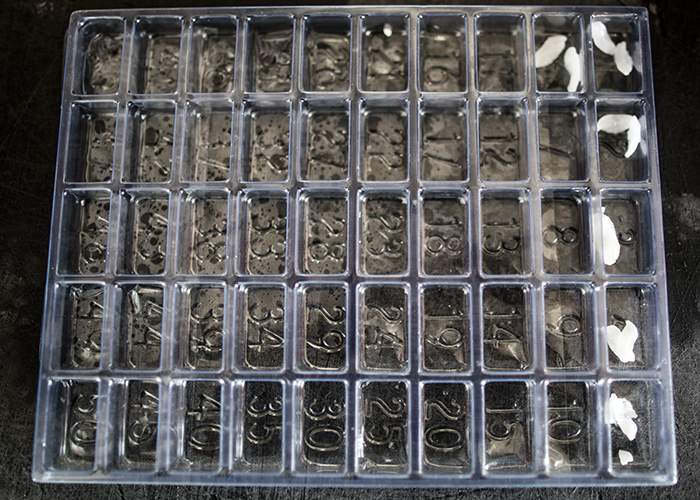 This data, together with that collected by fishing boats and research vessels, is used to determine the health of the fish population and therefore the amount which can be fished safely without causing the stock to decline.

Despite fish never being far from politics in Iceland, the government abides closely to scientific advice when setting quotas. And as stocks recover, they have been able to slowly and carefully increase the amount that can be caught. 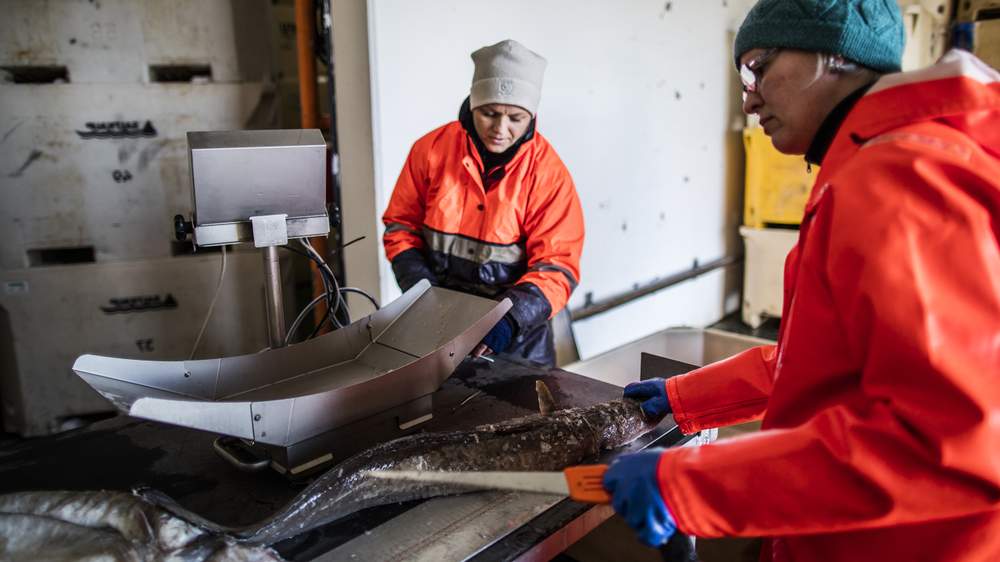 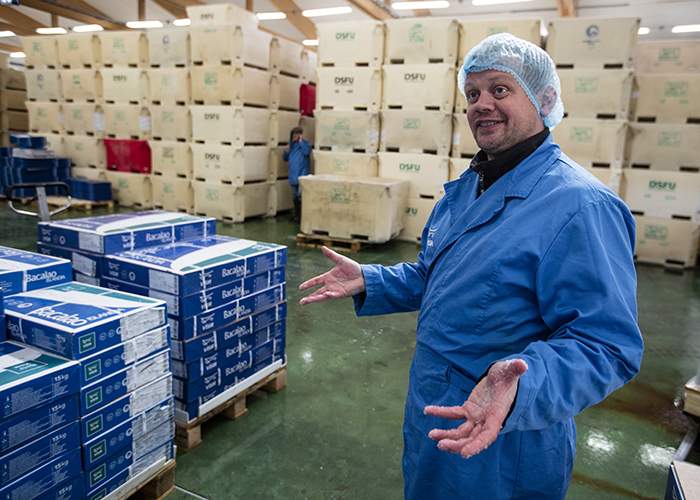 The quota system also means Iceland’s fishermen no longer fish to fill their boats, they fish to order.

Thanks to their computer systems Visir's processing managers know how much fish is on board a boat, how big the fish are and the quality of the catch, even before a vessel comes into port.

This data feeds into sales and processing software so the catch can be sent directly to processing, with fresh fillets on a plane bound for Europe within 24 hours of arriving on land.

Fish is sold with tracking information which leads it right back to the day and boat it was caught on.

"Fishing is my life's work."

Ólafur Óskarsson, captain of the Johanna Gisladottir, Visir’s largest boat, named after Pétur’s grandmother, has been a fisherman since he was 16. He’s just returned to Grindavik after four days at sea. His boat is laden with cod and ling. 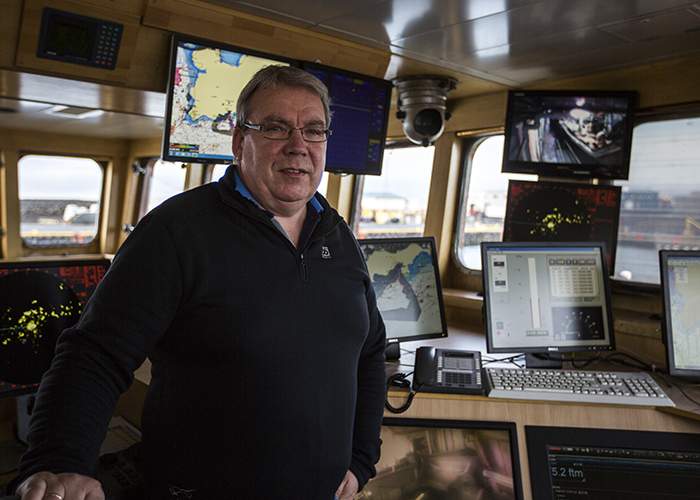 Ólafur's job is increasingly high-tech: a bank of computer screens show his location, the sea floor, water temperature and weather. He can access 15 years of data from previous fishing trips and see the weight of his catch in real time. Below deck CCTV keeps an eye on the machinery and seven crew members.

Ólafur is careful to operate within the boundaries set by the government to ensure sustainable fishing. At the moment (mid-April) fishing areas up to 12 miles out to sea are closed to allow fish to spawn.

He avoids areas with coral and an underwater 'mountain' in order not to damage habitats and to prevent the fishing line from becoming tangled. There can also be rapid closures of areas if there are a lot of small fish in the catch. But this happens very rarely now as the health of the stock has improved and fish are bigger than they used to be. 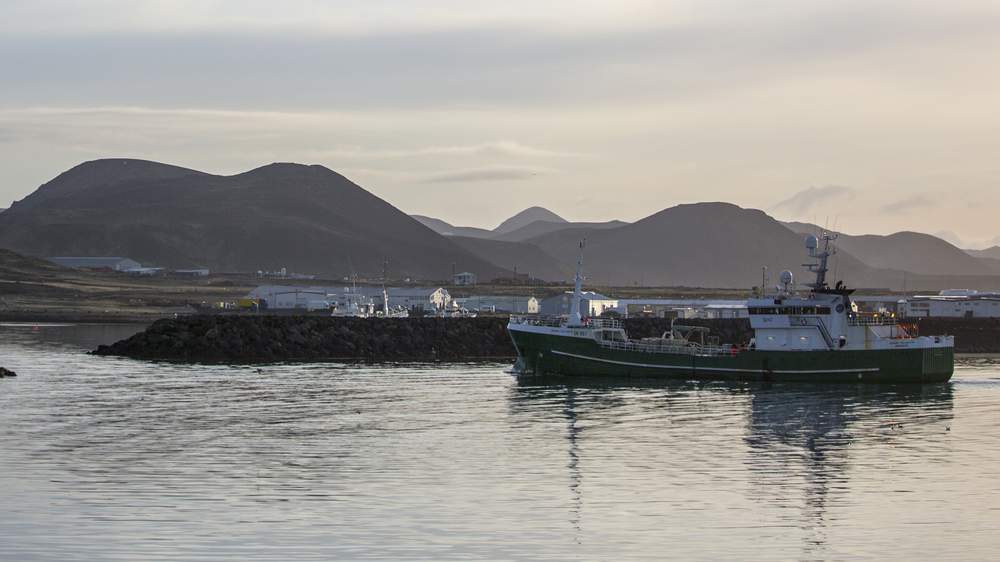 One of Visir’s main products is salted cod and ling – known as bacalhau. Bacalhau is traditionally eaten in Mediterranean countries, and also popular in Brazil. There is high demand for quality products which, preserved in salt, can be kept for many years.

To create a traditional bacalhau, a butterflied cod fillet is first soaked in brine for 24 hours. It’s then coated in salt and allowed to cure for 21 days before being packaged and shipped to market.

Before it can be cooked and eaten, the bacalhau must be soaked in fresh water (with a ratio of roughly two parts water to one part fish), and the water changed every 24 hours for four days.

Bacalhau is traditionally eaten at Christmas and shared by the whole family. During the peak season (September to March) Visir alone sends six shipping containers full of bacalhau to Spain, Italy and Greece every week.

At Rio 2016 salted cod will be served as Bolinhos de Bacalhau, salted cod croquettes traditional to Brazil and Portugal. 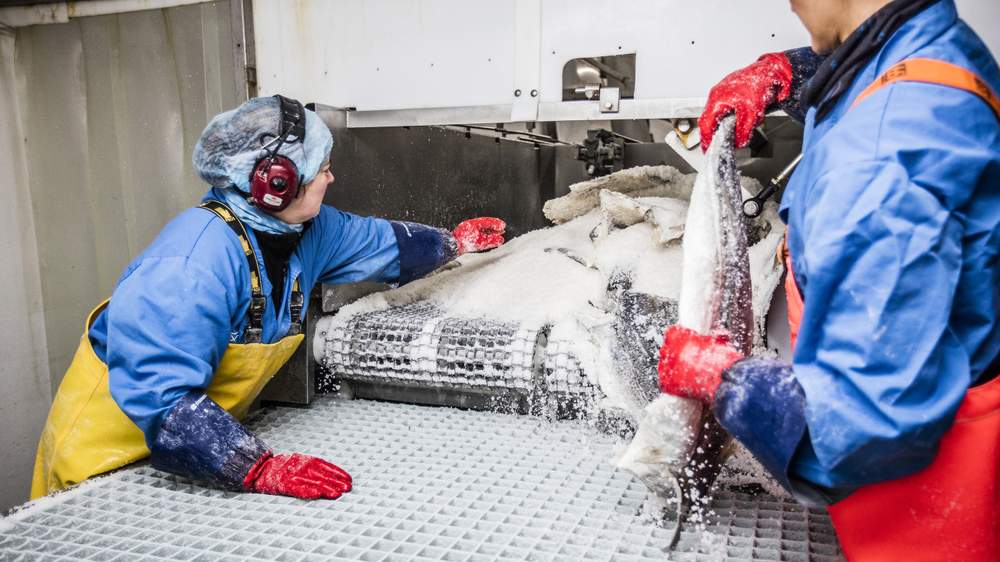 The investment in technology and careful management means Iceland been able to achieve MSC certification of its cod, ling, haddock, herring and saithe fisheries. 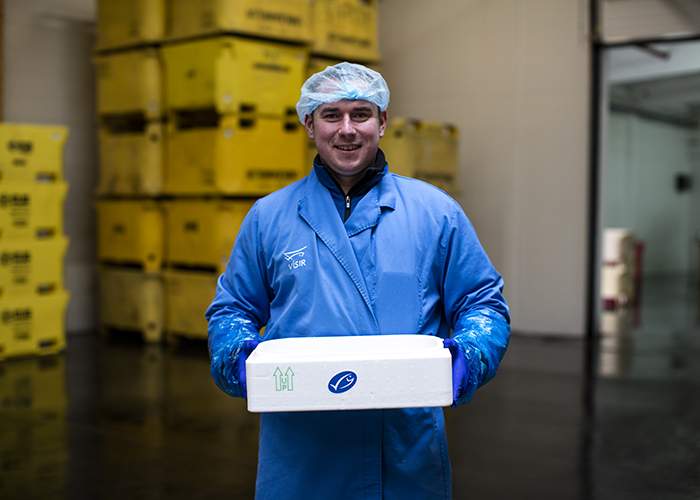 Fishing companies share the cost of assessment to the MSC’s standard, via a cooperative called Iceland Sustainable Fisheries. All companies involved have an equal opportunity to sell their fish with the blue MSC label.

The MSC label not only validates Iceland’s effort in protecting the environment but gives reassurance that this way of life can continue to thrive for future generations. For Pétur, the ability to offer certified sustainable products has become fundamental to selling fish.

MSC certification has opened new markets for the Icelandic fishermen and was fundamental to securing the contract to supply cod to the Rio 2016 Olympic and Paralympic Games.

By buying MSC labelled fish, business and consumers are rewarding the Icelandic fishermen for their efforts. 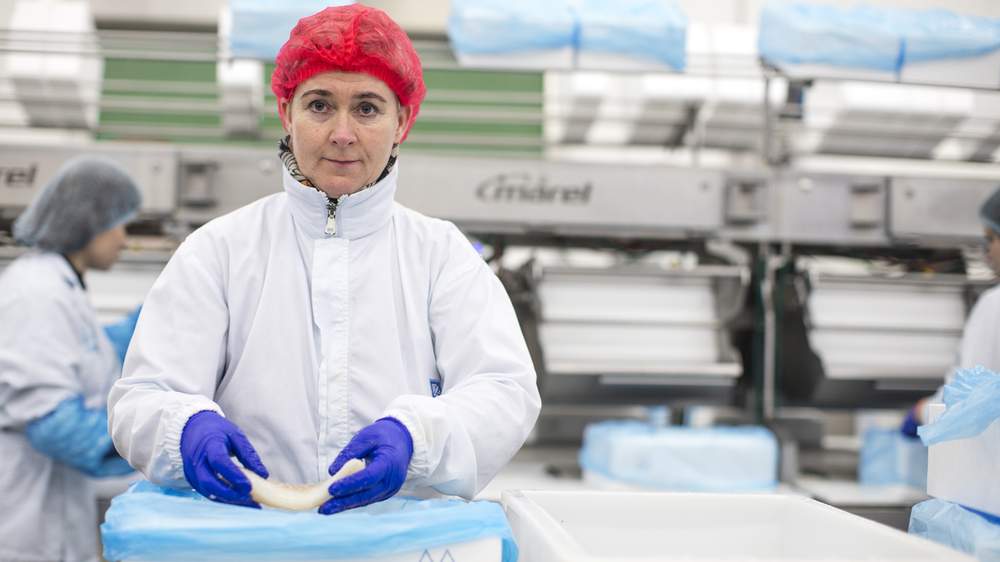 Every part of the cod and ling caught by Visir’s fleet is put to use. Tongues are sold on the local market. 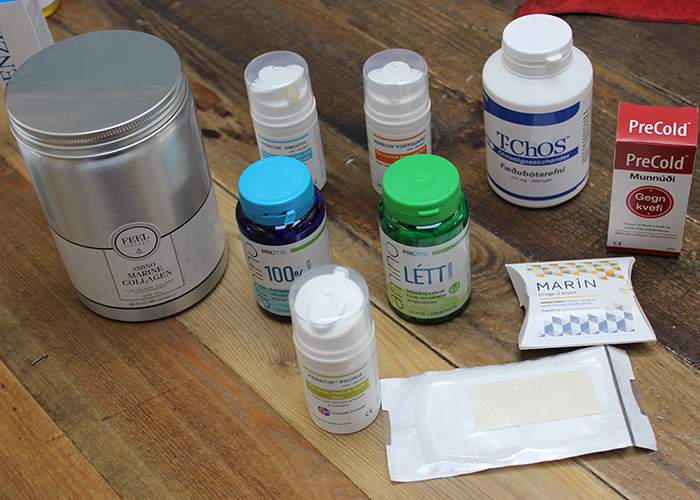 Backbones and heads are dried for sale in Nigeria. There’s even a market for swim bladders as an aphrodisiac in China.

More recently, Iceland has diversified, producing Omega-3 rich fish oils. Visir is investing in a new factory to produce collagen from fish skin and enzymes from the guts.

There are even plasters made from fish skin which are good for people with skin allergies. All are sustainable and can be sold with the MSC label.

It's these new technologies and markets which Pétur believes will attract the future generation into the fishing industry. Thanks to the efforts of this generation the opportunities are endless.

Read about the Rio 2016 commitment to sustainable seafood >